What is the one thing that excites you the most about New Year?

Proudly declaring resolutions? Or, secretly making commitments?
Partying hard with friends? Or, having a silent dinner with family?
Going on a vacation? Or, snuggling up under the blankets?

For me – it’s “The Promise” for the year. You might call it a custom or a ritual, but to me it’s something more – something special. At the beginning of the year, it gets me excited and keeps me going day-by-day, and at the end of the year, it keeps me waiting for a new one.

Going back into the past… Well, I love recollecting episodes (Who doesn’t? 😛 )
As a child, I always loved to pick my promise card. To be honest, that’s the only thing which kept me awake in church (a service that’d start at 9:30 PM on 31 December and go on into the early hours of the next day). I would keep my red, drowsy eyes wide open to stay awake just for that auspicious moment (Imagine Tommy in Tom & Jerry supporting his eyelids with toothpicks to prevent them from falling. I just didn’t use toothpicks. Lol)

I considered it (the promise) a surprise (Tell me which girl doesn’t like surprises & promises. 😉 Now, don’t start a discussion with my husband regarding that. 😛 He has now learnt to say “I’ll try”, instead of “I will”. My darling smarty pants! And I love him for all that he is!)


Our church hall would run out of space for every New Year’s Eve service. A red carpet went all the way down the aisle which also acts as a gender-separator – true story. A bright star hung from the ceiling at the altar. The cards dangling from the star, delicately stuck to color papers. When the hour arrived, the star is let down with the help of a rope and pulley (reminds you of old church bells? 😀 )

As the old church orchestra (harmonium, tabla, tambourine and chimta) began their melodious tunes, the congregation singing and walking in a queue towards the altar, from the back to the front (It’s not “from the front to the back” 😛 ) eagerly awaited their turn to pick what most people consider to be a sacred promise from God. Every year I waited patiently for my turn, while watching the excitement on other people’s faces.

Walking up the aisle to pick a surprise card, which delivers a promise always gave me so much joy – a joy so great that not even a bride would experience while walking down the aisle with her groom, and I’m not exaggerating. I don’t know how others felt, but my words cannot describe my enthusiasm – I considered it my own, as if it belonged only to me and I deeply believed it would be fulfilled in my life. And, I still hold my promises very dear to me.

If there’s one thing I don’t want to change in my way of celebrating New Year, it is this – “Picking my promise card”. It doesn’t really have to be as dramatic as it was during my childhood, but all that matters is “A Promise” – a promise from above, which is very real and is fulfilled in His perfect time.

Do you have something you’d never want to change no matter where you celebrate or which custom you follow? 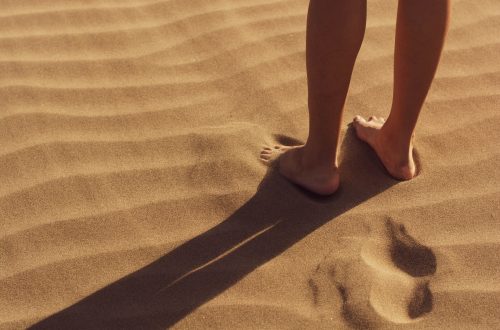 “S”he was caught! What about you?